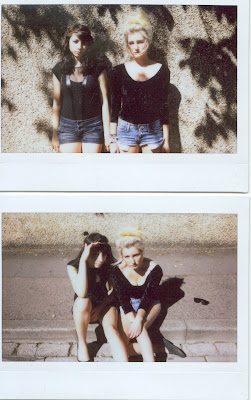 Did a shoot with Dina and Georgia last week, really wanted to do it in the abandoned children's hospital had it all planned out got tips on how to break in and everything but nooooo luck.
So we went to the green electricity box round the corner as advised but even on top of that there was a wall and an extra bit a wood that meant it was even harder to climb over without breaking your neck! We went round near the gates and found a decent enough climbing spot but due to amount of beeping cars and dodgy looks we got whilst bums and legs waggling in the air we gave up and went to the gates... which were open. We tried to convince the guard to let us take a few photos but he was havin' none of i'.
After a little heart sinking and planning hatching we stayed round the back of the hospital and used the road and various spaces. I did a roll of black and white and roll of colour which just need to be finished before I develop but i was quite happy with how it turned out, really liked the shadows and it was a really sunny day which also helped. So fingers crossed the photos are good but for now here's some fujis (slightly cropped by the scanner).
BA
Posted by Beaz Neaz at 16:38